Happy New Year, everyone! I’m kicking off 2014 with a rerun post to celebrate the paperback release of Melanie Benjamin‘s The Aviator’s Wife. Melanie is the best of what book publishing has to offer: both a wonderful writer and an incredibly generous one. I’ve knocked on her virtual door for advice more often than I can say, and she never fails to open it and smile. So I’m watching the continued success of this wonderful novel – it was a New York Times and USA Today bestseller in hardcover and has already spent five weeks on the New York Times paperback bestseller list – with great joy. It’s a wonderful novel, and an inspiring post. – Meg 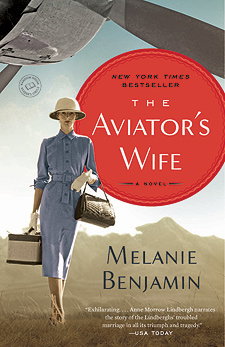 I’m always a little ashamed to admit that unlike so many of my peers, I didn’t want to write from the moment I could hold a crayon.  What I did want to do was win an Academy Award.  I always dreamed of being an actress, and that is what I pursued, at first, as an adult.
But I was always a reader, and the books I read tended to whisk me away to different times and places; I grew up in the uninspiring (to me) Midwest, and always wanted to be anyplace but there.  And anyone but me.  As I said, this initially pushed me into acting.  Then marriage, children, PTA intervened, and suddenly I was in my late thirties.  It was at this time that a dear friend told me, “I always thought you’d be a writer.”  To this day, she doesn’t know why she said it, and neither do I.  Writing was always something that came easily to me; I relied on it, probably too much, to get me through school.  I didn’t study a lot but if there was an essay question or a book report due, I was golden.  It was just something I did, and I never really thought it was something that required study or could be a career.  It was like breathing; you just don’t give it too much thought, do you?
But when my friend said this, it was as if the angels parted the heavens and shouted hosannas upon my head.  Everything just clicked; I was in a place where my children were older, I had time on my hands, and I was frustrated by PTA and life as a soccer mom.  So I sat down and wrote a couple of parenting essays, sent them off to a local paper and was offered my own column.  Then, I heard about a short story contest sponsored by my local NPR station, and I wrote my first short story since a creative writing class first year of college.  And I won.
Then I got cocky, and wrote a novel.  That, to me, meant legitimacy; “author” meant “novelist,” in my mind.  Well, that novel wasn’t very good, and I spent about a year trying to make it better, querying and re-querying agents, revising and re-revising, until I just got sick of the thing and started something new.  That was an epiphany for me; I realized, at that moment, that I would never run out of words and stories to tell.  And maybe that’s what my friend meant when she said she thought I would be a writer; I just look at the world differently, and am hyper-articulate and can’t be shut up.  Traits that some – like my family, while I was growing up! – might find annoying, but that come into good stead when you want to write novels.
So I wrote another novel, got an agent for that novel, got orphaned by that agent, got another agent, but the novel never sold.  Meanwhile, I wrote another novel.  The second agent hated it, dropped me, but I got another agent – my third, for those keeping count! – and that novel didn’t sell, either.  But this agent, who is still my agent, had faith in my writing, and encouraged me to write something else, and finally she sold my next novel.

That novel, and its sequel, did not “fly off the shelves,” as we say.  My publisher dropped me.  So what could I do, but write another novel?
That has been my saving grace, I firmly believe; my ability to keep writing “Chapter One” while wading through a swamp of rejection.  Maybe I’m stupid, maybe I just have a short term memory problem, I don’t know.  I do know that I have a strange ability to be absurdly confident of my abilities while absorbing criticism and the sometimes harsh realities of the publishing world.
I wrote several novels between being let go by one publisher, and picked up by another.  In the process, I found my way as an author.  The books that did not fly off the shelves were not books I would have ever been interested in writing again, or even reading.  They were conceived more as an experiment, having come so close to being published so many times.  But they weren’t me, they weren’t authentic.  I inched my way, agonizingly, to historical fiction but once there, felt as if I’d found my calling.  That dreaminess as a child, that desire to be someone else, in another time and place – that all makes sense, now.  And I was always a history nerd, the child who begs to be taken to visit museums on vacation, instead of amusement parks.
When I wrote Alice I Have Been, my agent had a suspicion that this would be the book that got me back in the game, so to speak.  And she suggested that I think about changing my name, so as to further distinguish this book, in a new genre, from my old ones.  I was perfectly fine with that.  I am rather unsentimental about things – again, I think this enables me to keep writing, no matter what.  I pour my sentiment out on the page; in real life, I keep it in check.  If changing my name meant this book would have a better chance at publication and success – and ultimately, it did – then that was fine by me.  The most important thing I write is always between the covers, not on them.
And that’s where I am today; happily Melanie Benjamin, author of historical fiction, always searching for new stories to tell, new people to be.  Always starting a new book, even before the ink is dry on the last.  Because, as my friend said long ago – I am a writer. – Melanie