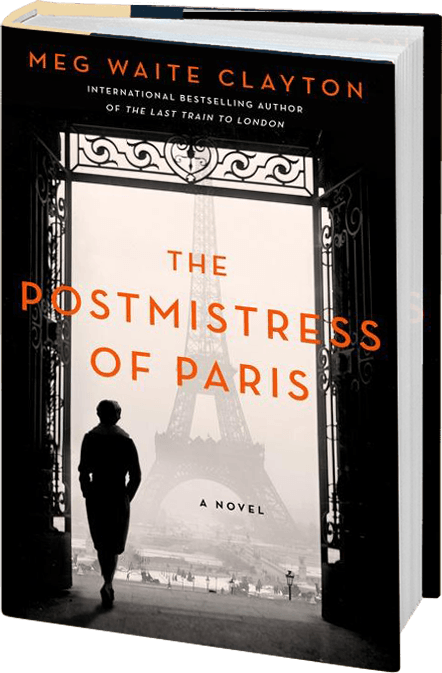 “The very best kind of historical fiction: a complex and intriguing story that both highlights a little-known moment in the past and resonates powerfully in the present.” – Christina Baker Kline

“The work of an unsung heroine rises from the pages of The Postmistress of Paris, a story readers of historical fiction and strong female characters will devour.” – Lisa Wingate

“An evocative love story layered with heroism and intrigue — the film ‘Casablanca’ if Rick had an artsy bent … powerful.” – The San Francisco Chronicle

“Fans of Kate Quinn and Kristin Hannah will want to dive right into The Postmistress of Paris.” – BookPage

“⭐️ Lyrical, thought-provoking prose… This sterling portrait of a complex woman stands head and shoulders above most contemporary WWII fiction.” – Publishers Weekly, in a starred review

“⭐️ A true gem … a testament to the power of good.” – Library Journal, in a starred review

“I loved The Postmistress of Paris, a novel of so many layers–a suspense story, a love story, and a story about the purpose of art. Meg Waite Clayton is a brilliant and deft writer.” – Lisa Scottoline, New York Times bestselling author of Eternal

The New York Times bestselling author of The Last Train to London revisits the dark early days of the German occupation in France in this haunting novel—a love story and a tale of high-stakes danger and incomparable courage—about a young American heiress who helps artists hunted by the Nazis escape from war-torn Europe.

Wealthy, beautiful Naneé was born with a spirit of adventure. For her, learning to fly is freedom. When German tanks roll across the border and into Paris, this woman with an adorable dog and a generous heart joins the resistance. Known as the Postmistress because she delivers information to those in hiding, Naneé uses her charms and skill to house the hunted and deliver them to safety.

Photographer Edouard Moss has escaped Germany with his young daughter only to be interned in a French labor camp. His life collides with Nanée’s in this sweeping tale of romance and danger set in a world aflame with personal and political passion.

Inspired by the real life Chicago heiress Mary Jayne Gold, who worked with American journalist Varian Fry to smuggle artists and intellectuals out of France, The Postmistress of Paris is the haunting story of an indomitable woman whose strength, bravery, and love is a beacon of hope in a time of terror.

Praise for The Postmistress of Paris

Gripping … an evocative love story layered with heroism and intrigue — the film “Casablanca” if Rick had an artsy bent … powerful … Clayton’s book celebrates courageous acts, large and small, within the vast Resistance network from forgers, lookouts, drivers, mapmakers, innkeepers with secret rooms. And “The Postmistress of Paris” is an homage to the courage of creative acts, to the refuge of art and its reminder, or insistence, on our shared humanity.” – L.A. Taggart, The San Francisco Chronicle

“While Clayton superbly crafts banter, parlor games, romance and philosophical discussions among her cast of talented, intellectual characters, her writing is at its sharpest whenever Nanée faces great danger—which is often. Tension builds throughout the novel, culminating in a grueling, dangerous escape attempt that’s full of surprises. Fans of Kate Quinn and Kristin Hannah will want to dive right into The Postmistress of Paris.” – Alice Cary, BookPage

“As a ‘postmistress,’ Nanée does deliver messages to those in hiding from the Nazis, but she also strikes out on her own, plotting daring rescue attempts that will take her to a notorious internment camp, then deep into occupied territory…Might she be able to reunite [refugee artist] Edouard and [his daughter] Luki and somehow get them to America? Awaiting the answer to that question, and wondering about its impact on Nanée’s own future, enriches Clayton’s already suspenseful plot.” – Alida Becker, The New York Times

“Clayton’s characters are compelling, with richly-developed inner lives and the narrative drives masterfully to its pitch-perfect end.” – Janet Somerville in The Toronto Star

“⭐️ Clayton (The Last Train to London) expertly renders the story of a courageous American woman’s role in the French Resistance during WWII … Clayton’s lyrical, thought-provoking prose breathes life into her characters. This sterling portrait of a complex woman stands head and shoulders above most contemporary WWII fiction.” – Publishers Weekly, in a starred review

“⭐️ A true gem … a testament to the power of good.” –  Portia Kapraun, Library Journal, in a starred review

“A sweeping tale of perseverance and courage set against the backdrop of Nazi-era Europe, The Postmistress of Paris is the very best kind of historical fiction: a complex and intriguing story that both highlights a little-known moment in the past and resonates powerfully in the present, reminding us that bigotry can only be vanquished when people are willing to take a stand.” – Christina Baker Kline, #1 New York Times bestselling author of The Exiles and Orphan Train

“Widely esteemed for her previous World War II novels, Meg Waite Clayton triumphantly returns with The Postmistress of Paris, a story of one woman’s heroic quest to help the forgotten in Occupied France. Clayton’s immaculately researched and beautifully written tale of passage and courage and heart is her best work yet.” – Pam Jenoff, New York Times bestselling author of The Woman With The Blue Star

“The work of an unsung heroine rises from the pages of The Postmistress of Paris. Meg Waite Clayton draws a vivid contrast between the beauty of art and the brutality of war, the power of humanity and the human cost of cruelty, greed, and prejudice. With a heart-stopping flight across war-torn Europe, this is a story readers of historical fiction and strong female characters will devour.” – Lisa Wingate, # 1 New York Times Bestselling Author of Before We Were Yours

“This gripping historical love story from Clayton (The Last Train to London, 2019) brings readers into the courageous lives of those struggling just to stay alive and those risking everything to help.” – Melissa Norstedt, Booklist

“The Postmistress of Paris is a layered story of suspense, romance, and the beauty of art, inspired by the true story of a woman who helped to smuggle artists and intellectuals out of German-occupied France.” – Nancy Pearl, Booklust

“Clayton does a magnificent job at giving her readers a good understanding of the lengths people would go through to escape occupied territory. She expertly blends real life characters … with fictional characters that you can’t help but fall in love with. Fans of historical fiction will not want to miss The Postmistress of Paris.” – The Suburban, Quebec

“The Postmistress of Paris is at once an intense, if often understated, love story and one of incredible danger and courage … a compelling story, and a starting point for any introspective discussion Surrealists might provoke.” – Gordon Arnold, Winnipeg Free Press

“An unexpected love story — for an adopted country being overtaken in war, for a chosen family, for art, and for a poodle who will stand by his mistress through it all… This is one of those stories that shines, its characters flawed and lovely, and generous to a fault…THE POSTMISTRESS OF PARIS is a captivating story about a woman giving everything she has to help, even in a small way, restoring a bit of faith at a time when we all need to know that good things can still happen.” – Amy Gwiazdowski, Bookreporter

“Based on extensive research about the resistance during Germany’s occupation of France, The Postmistress of Paris … spins the best kind of suspenseful tale, where the reader worries not so much about what will happen but how it will happen. Inspired by the life of an American heiress who helped artists hunted by the Nazis escape from war-torn Europe, The Postmistress of Paris features a feminist heroine, a love story, a celebration of art and human creativity, and resistance against fascism (with strong parallels to the current rise of fascism, here in the US and abroad).” – Lucy Jane Bledsoe, The Rumpus

“This fast-moving narrative slips seamlessly between locations, characters, and subplots. With its breathtaking turns, back-street meets, and an intensifying attraction between Nanée and Moss, Meg Waite Clayton’s tale portrays a quiet woman who, fueled by courage and dedication, chooses to risk her life breaking laws rather than save it by returning home to a stifling society life governed by Evanston rules. Recommended.” – Rebecca Kightlinger, The Historical Novels Review

“Intense and Emotional Historical Fiction… Quite wonderful… I recommend it strongly. I enjoyed every–every–minute of it.” – Sandi Henschel, Audiofile Behind the Mic

The History Behind the Novel, Interviews, and other Extras

Evanston heiress Mary Jayne Gold, who helped rescue Jews and artists in Nazi-occupied France, is the inspiration for a new novel by a bestselling author by Nara Schoenberg in the Chicago Tribune

Art, Love, and Resistance in 1940s: Talking with Meg Waite Clayton by Lucy Jane Bledsoe in The Rumpus

Paris, 1939, a piece I wrote about the real history behind The Postmistress of Paris for The Jewish Book Council’s PB Daily.

The Postmistress of Paris: A WWII Drama Celebrating a Heroine Who Saved Parisians from the Nazis an interview by Jessica Gliddon in Marin Magazine