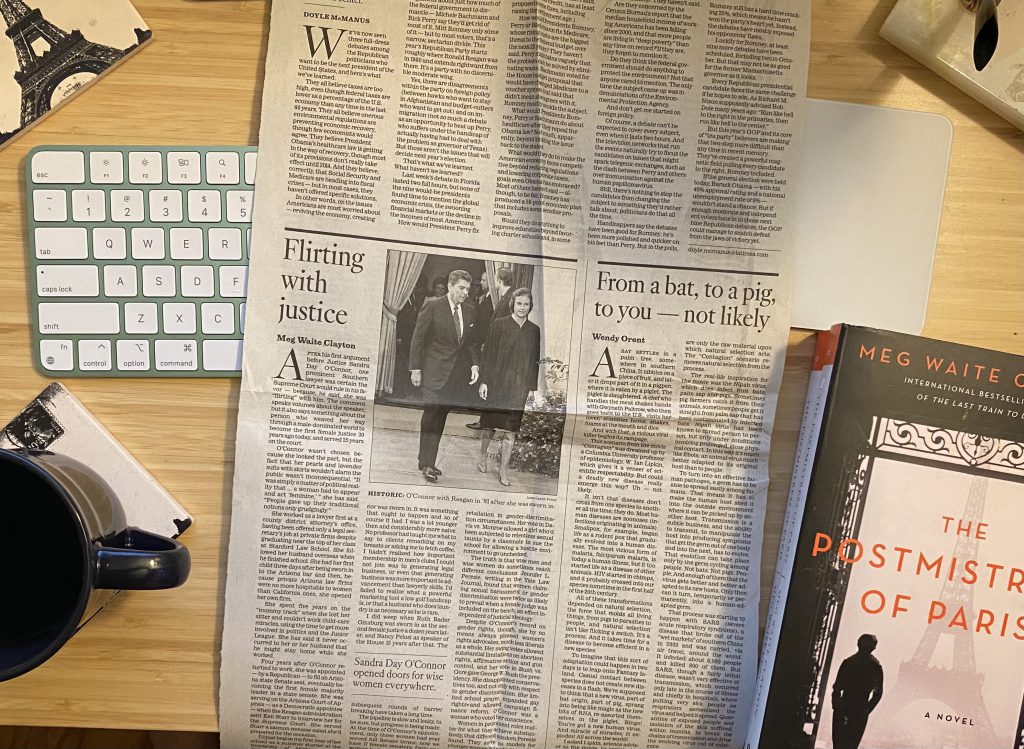 Ten years ago today, on the 40th anniversary of Sandra Day O’Connor taking her seat as the 1st female Justice of the Supreme Court, I published my first opinion piece. “Flirting with Justice” ran in the Los Angeles times, and was also picked up by the San Jose Mercury News and the Miami Herald. It remains as relevant today as it was then, so read it, please! It’s publication opened doors for me to write for other news sources, too, so I thought I’d offer a little bit here about how I broke into writing opinion pieces with this.

I’ve long been an opinion reader, which is the first step to writing anything — to know what it is you write.

I found a great source of how-to information at the OpEd Project, which was started to change who writes history — an organization in which I now mentor.

I chose something I was in a unique position to write about. I’d just started law school when this happened. And a topic about which I’m passionate: having women in prominent roles matters!

I knew it could take me months to place the piece because I didn’t have opinion credits (although I did have short stories, essays and novels) or relationships with editors, so I wrote it months before it might run, and pitched it months before too. I had compiled a list of newspapers to which I wanted to submit, and started at the top of the list. I submitted through the general submission door, which was the only way in I had.

And Susan Brenneman from the LA Times pulled it from her (email) slush pile. She is a fabulous editor, and I learned so much about writing opinions from her — not just with this piece, but with the many pieces of mine she has published over the years.

Now I have those relationships, which is important in opinion writing. The news cycle moves so fast these days that if I want to write an opinion about something, I sit down and do it, and pitch it. Sometimes it runs later that same day, before it gets stale.

But if you want to break into this world — and it is a really rewarding space to write in, not financially, but in audience reach and impact — consider starting with something you are passionate about that might also be timeless, so your piece can have time to be found before it turns stale.

Happy Saturday! Which for me, is just another writing day, because I love what I do.