In celebration of Nanowrimo, I’m rerunning some of my favorite guest author posts (and trying to tidy them in the process). This one was written by Booker finalist Karen Joy Fowler for June 5, 2013 — on the occasion of publication of We Are All Completely Beside Ourselves, which went on the win the PEN/Faulkner and make her the first American ever shortlisted for the Booker Prize. The book remains on my all-time fave shortlist. And her post is inspiring! – Meg

My original intro — and I’m very sorry to say Karen is NOT reading at Books Inc. tonight, but on that tonight we drank champagne, to celebrate her getting the cover of the New York Times Book Review:

I’m in the seventh literary heaven to be introducing today’s guest: Karen Joy Fowler is the author of six novels and three story collections, including The Jane Austen Book Club, which spent thirteen weeks on the New York Times bestsellers list; Sister Noon, a finalist for the 2001 PEN/Faulkner Award; Sarah Canary, which was listed for the Irish Times International Fiction Prize; and two World Fantasy Award winners, Black Glass and  What I Didn’t See. Pulitzer Prize-winner Michael Chabon says of her, “No contemporary writer creates characters more appealing, or examines them with greater acuity and forgiveness.” I just finished reading her newest novel, We Are All Completely Beside Ourselves, which is not only an incredibly moving story, but also one that will change the way you think. If you’re in the San Francisco Bay Area, join me for her reading tonight at Books Inc. in Mountain View! – Meg 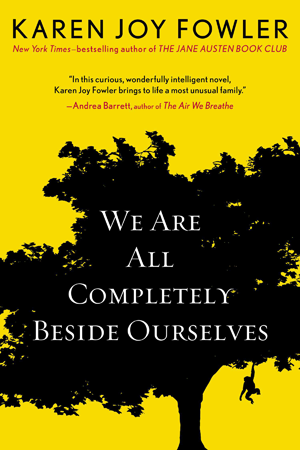 When I decided to be serious about writing, I joined a local writers’ group.  This was a critique circle of largely unpublished aspirants and I remained in that group until I moved away almost 30 years later.  I quickly realized that I was not very good, but I minded less than you might think, because I was learning so much and improving so quickly that for a long time all was well.

Then it wasn’t.  A few years in and I had corrected the obvious stuff.  I still hadn’t written anything truly good from beginning to end, but it was no longer easy for my beloved group to pinpoint why.  I spent the next three years writing story after story (and if I’m being honest, submitting story after story) with a sinking understanding that they weren’t good enough, but no idea how to make them better.

The dam finally broke when I attended a lecture by Robert Hass.  He was talking about poems and I was writing stories, but that did not matter.  He talked about complicating your endings, about endings that opened a work up and endings that closed a work down, about endings that could be read simultaneously as Shakespearian tragedy and Mel Brookes comedy, and about writing endings you believed to be true.  He told wonderful stories with wonderful endings.

As I sat and listened, smarter than I usually am because of the need to meet the brilliant Hass if not halfway and least somewhere, I suddenly had a new ending to a story I’d been working on and sending out for months.  Twenty minutes later, I had a new ending to another story in progress.  I went home, rewrote those endings and while doing so, came up with a third new ending for a third story.  All of those stories sold within the month and those were my first three publications.

I will add this cautionary note that my improved endings are, I hear, still not for everyone.  You can take that up with Robert Hass. – Karen