For NanoWriMo month, I’m going to repost some of my favorite guest author posts, which I’m rereading to inspire myself! This one — by one of my fave authors, National Book Award winner Julia Glass — originally ran in September of 2010! I’ve just moved platforms, and have not yet tidied up everything here yet, but you can find other guest author posts under the Guest Author category through the drop down to the right. – Meg

Julia Glass‘s first novel, the National Book Award-winning Three Junes, is on my short list of all-time favorite novels. She’s won the Nelson Algren Award (three times!), the Tobias Wolff Award, and the Pirate’s Alley Faulkner Society Medal for Best Novella. Booklist says of her new novel, The Widower’s Tale, “Elaborately plotted and luxuriously paced, Glass’s inquisitive, compassionate, funny, and suspenseful saga addresses significant and thorny social issues with emotional veracity, artistic nuance, and a profound perception of the grand interconnectivity of life.” And gives it a star. As does everyone. I know you’ll enjoy her engaging post about her apparent overnight success – and The Widower’s Tale. – Meg 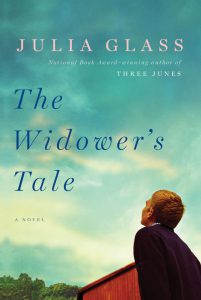 The Not Quite Yes

I started writing short stories in my late twenties, after ten years of striving to succeed as a painter. Having failed to snag the waitressing gig that was de rigueur for a struggling female artist in New York City, I’d figured out how to pay my rent with the word skills I’d always taken for granted: I was a proofreader and copy editor, a writer of faux travelogues (rhapsodizing over each and every Caribbean island without setting foot on a single one), and a pet columnist (don’t ask). In the seams of my patchwork life, I read novels and stories obsessively, devotedly, and—living alone, traveling far and frequently by subway—for hours on end. I subscribed to the New Yorker and the Atlantic because—yes, Reader, this was a long, long time ago—every issue included two brand-new short stories, often representing a writer’s “debut.”
Language sustained me no less than oxygen; making pictures began to feel oddly parenthetical. I spent my Saturdays mooning through the airless, timeless stacks of the Strand Bookstore, rather than the bright, sparkling galleries of uptown museums. What, I had to ask myself, was wrong with this picture? Even my paintings—scenes in which literally colorful people went about inscrutable tasks among strangely animated objects—suggested that what I wanted to do, more than anything else, was to tell stories. Never mind that I hadn’t written fiction since high school.

I still can’t figure out why this formerly stellar student did not apply for MFA programs or embrace the growing cosmos of the writer’s workshop. Chalk it up to a mix of necessary frugality, Yankee determination, and not a small pinch of grandiosity. Honestly now, had George Eliot or Jane Austen required an MFA? It’s easy to say, in retrospect, that clearly I didn’t need the degree, either, but one benefit I missed out on was a community of fiction writers—and the likelihood that I would have been published sooner. I worked on my stories in isolation for seven years, and it’s a wonder I didn’t quit.

Early on during this period, I was a full-time copy editor at Cosmopolitan magazine (which also, incidentally, published two short stories in every issue, by the likes of Laurie Colwin, Laurie Moore, and Elinor Lipman). Most nights, I worked on my stories by longhand in my Brooklyn apartment; during weekday lunch breaks and on weekends, I’d use my office typewriter to transcribe the final drafts. And then I would send them out to every reputable literary quarterly I knew of (Grand Street, Triquarterly, Sewanee Review et al.) . . . each story going out to no more than one journal at a time (a rule that some schoolmarmish writer’s guide warned me I must follow), along with my no-gimmicks cover letter and diligently postage-paid SASE.

Six afternoons per week, my hopeful heart throbbed as I opened my rickety mailbox.

Each time, for weeks or months on end, it sank: not at rejections—how I began to long for rejections!—but at the general silence. Some stories never came back. Once in a blue moon, having been held hostage for two months or more by the faceless editor whose approval I craved, a story would return to me in my carefully addressed manila envelope, a teensy form rejection tucked under my paper clip. Without exception, the stories looked as pristine as on the day I’d sent them out. I’d page through, hoping to see a coffee ring or doughnut crumb haloed by grease, any proof that a human being had read these words. (One bizarre cruelty of the now-defunct SASE protocol was that my rejections came to me with my handwriting on the outside, as if I were telling myself to face the mediocrity of my own imagination.)

Increasingly desperate, I realized I had nothing to lose by sending my stories to the big guns as well. I found the name of the fiction editor on the masthead of my current Atlantic; as for the New Yorker, where the omission of a masthead seems to declare, “Don’t bother us geniuses here, lowly Earthling,” I went to a party where I met a successful writer who shared the name of her editor there (though she told me not to use her name by way of reference).

I sent my next finished story first to the New Yorker. Not two weeks later, there was my SASE in the box, mocking me yet again, far sooner than usual. But this time, clipped to my manuscript was a full page of typing, on letterhead stationery, signed by the editor to whom I had addressed the story. He said many kind things about my story—things that showed he had read it, really read it—and then he told me why he couldn’t take it. He told me, and I will never, ever forget this, that I had “talent to burn” (a phrase I puzzled over at first, never having seen it). And he told me to send him more.
I wept. I think I’d been sending out my stories for two or three years at this point, and finally, finally, FINALLY, somebody had read one and responded. He spoke about my characters as if they were flesh and blood, their emotions as if they mattered. My protagonist actually frustrated him; he thought her too “hapless.” (Was I too hapless? I remember thinking.) I called one of my best friends and read the letter over the phone.

I went back to work on the story, responding to the editor’s comments, and sent it to the Atlantic. Again in record time, I received a reply: this time from an editor junior to the one on the masthead. It was another rejection, but it was several sentences long, most of which were encouraging and kind. Throughout her letter, the editor wrote in second-person plural, as in “We thought your descriptive powers quite novelistic” and “We’d love to see more of your work.” The royal we? I’d take it. Pages of my manuscript were bent, soiled; this in itself was cause for celebration.

This one-two punch of hopeful highbrow rejection gave me energy, yes indeed, to burn. People who cared passionately about fiction, who wanted new writers to publish, who had the power to make that happen, were on my side. Or that’s how it felt.

For the next four or five years, this dance of rejection, revision, resending, rethinking, rebounding continued. In all, I sent fifteen or twenty stories to my correspondents at each of those esteemed magazines. Once, the editor at the New Yorker asked me to revise a story and send it back to him. With obvious regret, he rejected it again. But I did not give up. (Remarkably, over all that time, as I continued to send my stories to the quarterlies as well, I received only one reply from any of them that gave me any hope: a scrawled sentence—Sorry, please try us again—on the miserly form rejection. The initials that followed were illegible.)

Finally, I won a modest prize and saw my first short story published in the pages of the Chicago Tribune. I was 37 years old. After that, no doubt because of it, I started getting real replies from the quarterlies. Two of them took stories of mine. Meanwhile, I came to realize that it was time to attempt a novel. In her rejection of an absurdly long story entitled “Collies,” my now-longtime correspondent at the Atlantic had praised it but remarked that it looked like the beginning of novel. And that’s what it became. It became Three Junes. 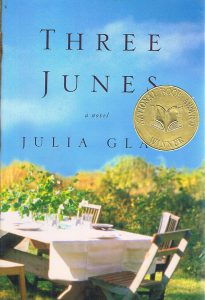 It still astonishes me that, without a community of fiction-minded peers or any writerly context other than my work as a “pet journalist,” I persevered through seven years of nothing but rejection. Like, what part of NO didn’t I get? But there’s stark, impersonal rejection, and then there’s the I-am-determined-to-one-day-accept-you rejection. What I think of as the Not Quite Yes. I know now that the letters I received from those two editors at those two magazines (who, in their own way, persevered on my behalf) were probably what kept me going. To this day, I have never been published in the New Yorker or the Atlantic; as recently as two months ago, I’ve received further rejections from successors of my two correspondents of a quarter-century back.

We are past the era of SASEs, of weekend forays to borrow the office IBM Selectric, of (alas) fiction in the pages of nearly every mainstream magazine worth its pulp. But this much remains true: As long as there are fiction readers, there will be editors and publishers of fiction who passionately want to hand the first yes to someone who’s weathered a tsunami of no.

How perfect it felt when I discovered that the editor who loved and bought Three Junes—let it be noted that every other editor who saw it said no (however politely)—had been a protégé of my correspondent at the New Yorker. Nothing thrills her more than putting a writer in print for the very first time. In the world of literature, there just may be a God. – Julia